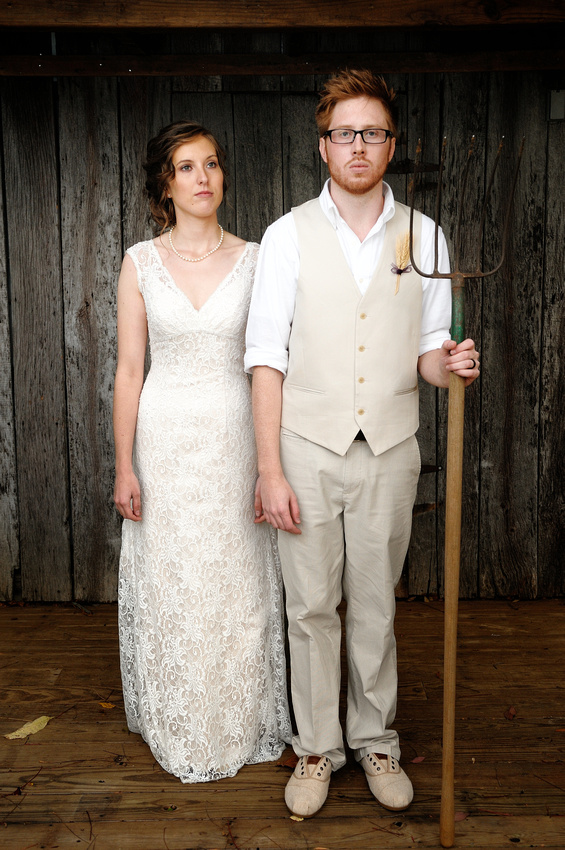 I am a little late in posting this picture but I have been concentrating on getting pictures back to the bride and groom in the picture. I still have more family pictures to process and I also did another set of pictures for a niece that was married last month. It was so much fun working with my nephew, the groom, and his bride because they were open to many different ideas. This was one suggested by my sister, Patti. The pose is adapted from the painting "American Gothic". We probably should have had the pitchfork in his right hand but that would have run the danger of covering the face of his beautiful bride. We had practiced the picture the day before and my nephew really struggled to keep from laughing. Maybe because he was just married, he had suddenly become much more serious. The picture was shot at 30mm with my Nikkor 17-55mm which is wider than I would normally shoot a portrait, but my feet were on the edge of a dock over the water. Background exposure was 1/100 and f4.5. Camera left was a SB900 flash mounted on a paint stick with an attached umbrella and held by a niece, Alissa, serving as a VAL (voice activated lightstand). I used this portable umbrella/flash combination on several outdoor "formal" wedding shots and it was a fantastic light. The flash was triggered by the onboard camera flash using the Nikon CLS system.

Ann Littlefield Coleman(non-registered)
Dave, too bad I don't have a wedding in my families future. We would know who to call on to make it very interesting. What a cute shot you offered up to your nephew and wife. They will treasure it for years and the memories of how it came about will be equally fun to recall. You always do such a good job and to put the secrets out how you did it should go in a book for learners of the trade.
Edie Littlefield Sundby(non-registered)
This is such a neat picture Dave ... you may start a new trend, "Hearne Gothic" a new approach to wedding portraiture :) I'm anxious to see other pictures from the wedding and hope you share them here.
No comments posted.
Loading...
Subscribe
RSS
Recent Posts
Plows, Family Roots, and History Roots Music To the Moon and Beyond Return From a Long Hiatus Hamilton House, S. Berwick, ME - digital sketch Back to Get More Rock The Nooning Let the Bridges Fall Down! Eureka! ...or this night Molly Stark sleeps a widow
Keywords
2013 landscape Vermont nature 2012 virginia Macro Winter portrait 2014
Archive
January February March April May June July August September October November December
© American Roots Photography
User Agreement
Cancel
Continue