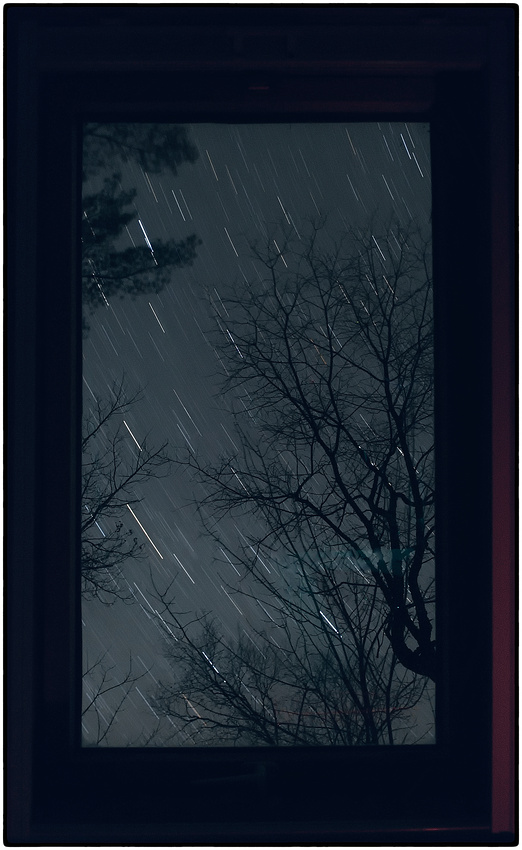 Last night I awoke as nature demanded. In our upstairs bathroom (Vermont) we have a skylight and last night was the first clear one we have had in awhile. The stars showing through the trees and the skylight were beautiful and in my half awake state I made a note that the scene was worth capturing someday. As I have written before, some pictures insist on being made. So even though I returned to bed, the picture still called. Being careful to not awaken Claire, I got my camera and tripod and setup in the small bathroom. Luckily, I had been thinking about doing a star picture so I was somewhat prepared with the needed technique. And thus I could do this in 10-15 minutes and be back in bed.

Initially I was just going for pinpoint stars and would use the bathroom night light to illuminate the skylight frame. But the skylight, being glass, was picking up too many reflections. When I killed all the light, I got the stars but nothing of the frame and the trees. I then decided that maybe star trails would allow an exposure long enough. For those unaware, really long exposure times (greater than say 10 seconds) on digital cameras require a second image to be shot to reduce colored specks referred to as "noise". I initially tried one minute, then two and I began to have the trees emerge from the sky background. But the trails generated by the Earth's rotation were too short to be aesthetically pleasing. I then tried 5 minutes and then finally 10 minutes. Thus the last exposure took a total of 20 minutes with the noise reduction shot. The frame never really was exposed other than some of it showing in the lower right. But in the end I got close to what I had envisioned and after 1.5 hours I could return to bed. As Roy would say Happy Trails to You for the remainder of 2012 and into next year. Nikkor 17-55mm/2.8 @ 17mm, f4, 10 minutes and long exposure NR on.

Patti Barksdale(non-registered)
I love the night sky and all the hard to capture beauty that it brings. I appreciate your diligence to capture this for us.
Ann Littlefield Coleman(non-registered)
I agree with Edie on what a scare you would give to everyone in the sleeping house had your shot come tumbling down. You do have an active imagination! This looks like something for a Physic classroom study with the earth's rotation. You never fail to entertain us with your pictures.
Ann Littlefield Coleman
American Roots Photography
Enjoyed reading about your art Uncle Dave. Beautiful Picture.
Edith Sundby(non-registered)
Lovely picture and certainly worth the time and effort. Your persistence paid off beautifully.

As you were describing setting up the tripod and camera in the middle of the night I could almost imagine the cacophony of it all crashing to the floor unexpectedly and waking everyone. You are a brave soul to take such risks.
No comments posted.
Loading...
Subscribe
RSS
Recent Posts
Plows, Family Roots, and History Roots Music To the Moon and Beyond Return From a Long Hiatus Hamilton House, S. Berwick, ME - digital sketch Back to Get More Rock The Nooning Let the Bridges Fall Down! Eureka! ...or this night Molly Stark sleeps a widow
Keywords
2013 landscape Vermont nature 2012 virginia Macro Winter portrait 2014
Archive
January February March April May June July August September October November December
© American Roots Photography
User Agreement
Cancel
Continue