Composition and Life - Coming and Going 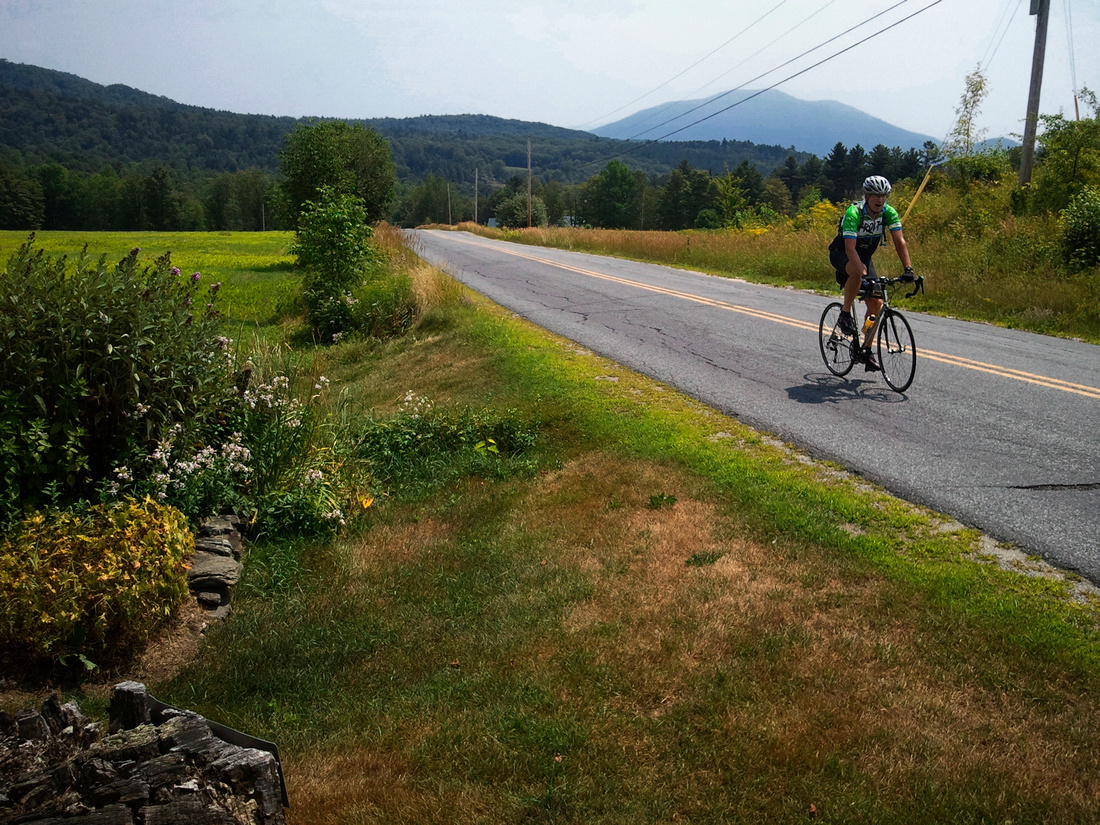 Some basic rules of photographic composition can be used to significantly improve your photos. One such rule is if a subject is apparently in motion, leave some room in the image in front of the subject to move into. But your images should also try to tell a story which sometimes means breaking the "rules". On Monday, I did one of my regular bike rides with 2 friends. The ride is known locally as "The Alps" ride because of the scene like this one. This was taken in the middle of a 6 mile climb, which if you watch the Tour de France is categorized as a Cat 2 climb. The real reason for posting the picture is the rider. I have certain people who are personally inspirational, like this rider. Bob is 70, has an artificial hip, and is an insulin dependent diabetic. Yet he bikes over 1500 miles and skis 50 plus days a year. Just below where the road disappears on the horizon, Bob came up a grade which maxed out at 13.6%. I had several elements I wanted in the picture: a landscape view to illustrate the "Alps", some foreground elements to anchor the photo (a rule), an indication of where Bob had come from (the road disappearing on the horizon), and Bob to be a significant element in the picture. To do so I had to wait until Bob was to the right and thus had limited room "to move in the picture". Later as I thought about the picture, the thought occurred to me that life has some aspects of this picture of Bob. At all stages of our life we have a perspective on the direction we are going but we are not exactly sure where. On the other hand where we are going is informed by where we have come from. Bob knows the challenges he has faced and is determined to keep going but will readily tell you he will continue to adapt to future challenges - in his case another granny gear for the bike. The picture was taken with my phone camera which because of a phone camera's very small sensor and lens has a large DOF and will make a decent landscape shot with both foreground and background elements in focus.

Rod Wendt(non-registered)
Bob is my hero, too. I was just ahead of Bob on this ride, and not in as good of shape despite his being a few years older. Too bad the camera couldn't capture the snorts of my desperately heavy breathing at the top of that 13.6% grade! Bob did it with so much more grace!
John(non-registered)
Go dad! Thanks for sharing this pic of my dad.
No comments posted.
Loading...
Subscribe
RSS
Recent Posts
Plows, Family Roots, and History Roots Music To the Moon and Beyond Return From a Long Hiatus Hamilton House, S. Berwick, ME - digital sketch Back to Get More Rock The Nooning Let the Bridges Fall Down! Eureka! ...or this night Molly Stark sleeps a widow
Keywords
2013 landscape Vermont nature 2012 virginia Macro Winter portrait 2014
Archive
January February March April May June July August September October November December
© American Roots Photography
User Agreement
Cancel
Continue