An August Macro - Cast Upon the Water

As many of my friends know, I like to fly fish and on occasion I tie flies. 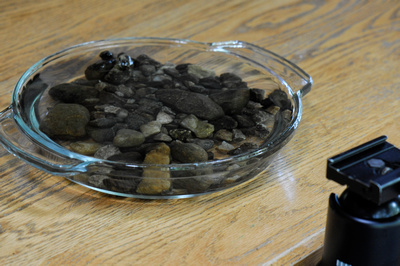 A well tied fly is a work of art and in fact some flies are tied as works of art. Even a large fly is small and when photographed they are usually in the tying vise or mounted on a piece of foam. I wanted to photograph the fly in the medium it is designed for - water. A dry fly is designed to float on the water and to entice a fish to see it as food. I initially thought I could just float the fly on a dish of water. But then the background was not very realistic. I decided to get some gravel from the lake and put it in a glass pie pan along with some lake water. I selected a Yellow Humphy and initially tried outside but there was too much wind blowing the fly about. So I moved inside under the dining room sky light. Even then I needed to close windows and doors as even the slightest breeze caused the #16 Humphy to move about. I also learned, as all fly fisherman know, that eventually the natural materials of the fly wet, so I had to add some floatant to the fly to keep it afloat. Finally I was ready to shoot. Because the fly would never totally stop I had to reach a compromise in aperture and shutter speed for some depth of field while keeping part of the image sharp, even then the ISO had to be bumped up. I could have used a flash but I really wanted natural light and the flash would very likely have introduced specular highlights. Most of the shots were from the side which showed more detail of the fly and would have been more documentary of the fly pattern. However,  I recently have become a fan of Mike Moats who is an excellent macro photographer and his voice told me to go for the shot that had photographic impact not documentation. Thus the final image shows the fly from the front with only the hook eye completely sharp. I have an idea of how to anchor the fly's movement in the future, but for now here is a dry fly upon the water. Nikkor 85mm macro, f10, 1/4 sec., ISO 800 on a tripod.

Ann Littlefield Coleman(non-registered)
As I've said so many times before, I always learn something new with each picture you send. Where have I been all my life! I never knew this much about a hook as it becomes a fly. Have you thought of an underwater shot looking up into the being of the fly as a trout would see it? Maybe we should tab your site as the Learning Center of Photography.
Edie Littlefield Sundby(non-registered)
Beautiful photo and beautiful fly - too bad the beautiful fly will end up in a fish's mouth :)
No comments posted.
Loading...
Subscribe
RSS
Recent Posts
Plows, Family Roots, and History Roots Music To the Moon and Beyond Return From a Long Hiatus Hamilton House, S. Berwick, ME - digital sketch Back to Get More Rock The Nooning Let the Bridges Fall Down! Eureka! ...or this night Molly Stark sleeps a widow
Keywords
2013 landscape Vermont nature 2012 virginia Macro Winter portrait 2014
Archive
January February March April May June July August September October November December
© American Roots Photography
User Agreement
Cancel
Continue