August Portrait - Gold in the Hills

Hurricane Irene wreaked havoc on VT almost a year ago. But a small silver, er Gold, lining has emerged from Irene's devastation. In the 19th century a minor gold rush occurred in VT, with much of the activity located very near Ludlow on Buffalo Creek. The torrent of water resulting from Irene exposed new sediment and now a "micro-mini" gold rush is on. Gold pans are being sold locally and books and DVD's on gold prospecting are readily available.

Today, I accompanied 2 friends on a gold expedition on the upper reaches of Buffalo Creek. This section is on private land owned by a 73 year old Vermonter who lives "off the grid" and can be reached only by 3 miles of rough dirt road. In the winter, the man must use a snowmobile to get in and out of his home. While we were there he showed us numerous pictures of the bear and coyote that visit his yard. The picture to the left shows my friends working their way up the creek which is at summertime low flow. I accompanied them mainly because I saw the trip as a photographic opportunity but I did try my hand at a little prospecting. Gold apparently is often associated with quartz which is prevalent in the creek. I even found a small gold flecked piece of quartz shortly after arrival. To get the shot below of my friend, David Almond, I used my Tamron 10-24mm @ 21mm, f20, and 1/60 sec. I also hand held my Nikon SB800 off camera left and tripped it wirelessly with the on board pop-up flash. BTW, I think the real money is in selling the panning supplies. 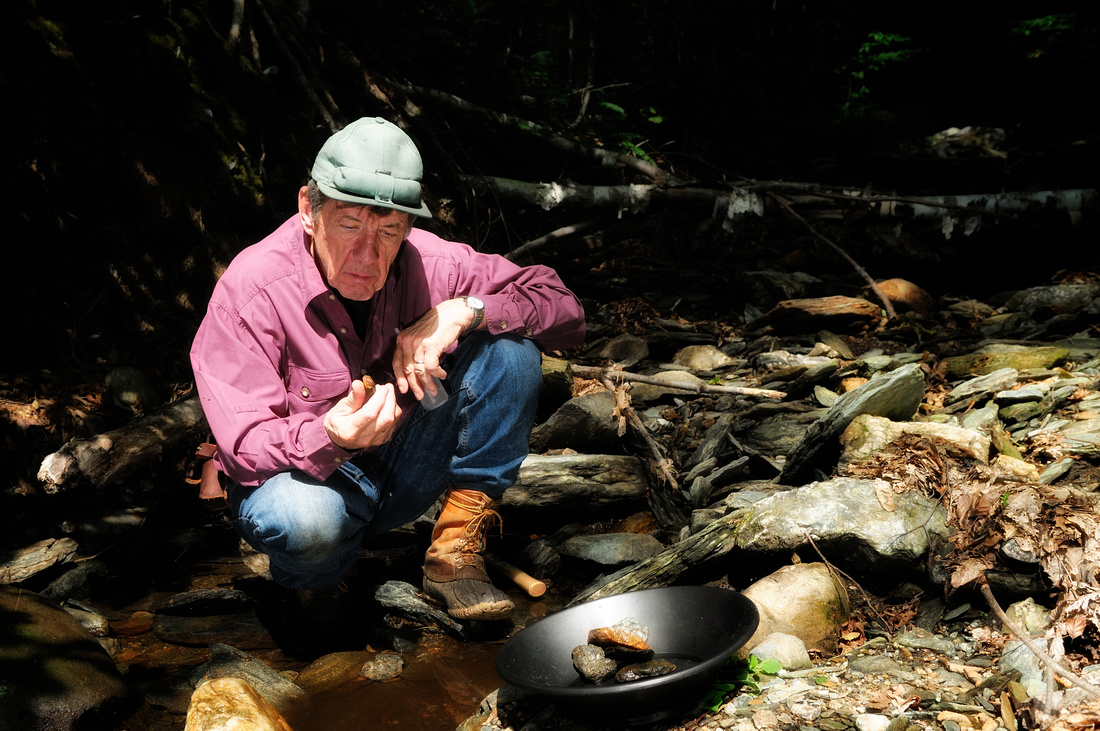 David Almond(non-registered)
This was my second visit to this property - a magical place. It is so refreshing to visit a true Vermonter that has lived off the grid for 13 years - despite a very unusual background. He was raised in Ludlow and attended the Black River Academy, the same one attended by Calvin Coolidge but, of course, at different times. That part was not the unusual part of his background. The really unusal stuff will remain a secret for now. While panning for gold was the draw to this place, the experiences of myself and my friends are priceless. When was the last time you met anyone that has a three-legged coyote for a pet? Or two ravens? Or turkey vultures? This man loves wildlife, with the possible exception of squirrels. It must be very satisfying to be as self-sufficient as this gentleman.
No comments posted.
Loading...
Subscribe
RSS
Recent Posts
Plows, Family Roots, and History Roots Music To the Moon and Beyond Return From a Long Hiatus Hamilton House, S. Berwick, ME - digital sketch Back to Get More Rock The Nooning Let the Bridges Fall Down! Eureka! ...or this night Molly Stark sleeps a widow
Keywords
2013 landscape Vermont nature 2012 virginia Macro Winter portrait 2014
Archive
January February March April May June July August September October November December
© American Roots Photography
User Agreement
Cancel
Continue