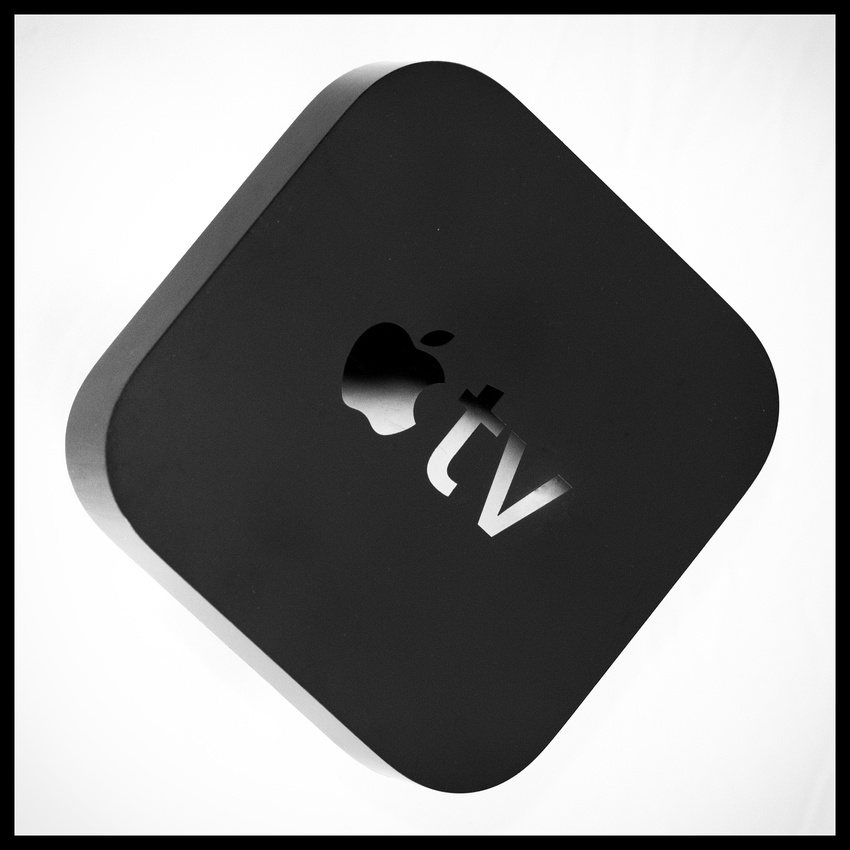 From the NY Times Television section, the link will take you to an article on a new Netflix produced series, "House of Cards", starring Kevin Spacey. On February 1, Netflix will make all 13 episodes available at once. The online streaming of movies and tv shows has been accelerating rapidly and content portals like Netflix and Hulu Plus are beginning to develop their own programming. This is not your 1950's commercial B&W television. When we first moved to Vermont Claire and I eschewed broadcast television opting to watch a few DVD's and otherwise listen to the radio. Then came high speed internet and streaming boxes like Roku and Apple TV and now we are watching a fair amount of tv again, albeit in a new way. So tonight we will bring up Downton Abbey (yes, we are fans) on Claire's iPad and then stream it through Apple TV to our television. When I saw this article the idea of a "product" shot of my Apple TV box formed. I wanted the box to have the appearance of maybe floating so it is balanced on a small glass over a white background. The lighting is side window light and an overhead skylight with a flash bounced off a white background underneath. I also positioned the shot to get some "glare" on part of the shiny logo while keeping half the apple black. Nikkor 85mm, 1/60 sec, f5, handheld with VR on.

Edie Littlefield Sundby(non-registered)
The photo has many meanings. The financial press has been aflutter recently on the demise of Apple stock after the demise of Steve Jobs in October 2011. The photo of the logo would be the perfect visual for where Apple is today without Steve Job's creative brilliance.
No comments posted.
Loading...
Subscribe
RSS
Recent Posts
Plows, Family Roots, and History Roots Music To the Moon and Beyond Return From a Long Hiatus Hamilton House, S. Berwick, ME - digital sketch Back to Get More Rock The Nooning Let the Bridges Fall Down! Eureka! ...or this night Molly Stark sleeps a widow
Keywords
2013 landscape Vermont nature 2012 virginia Macro Winter portrait 2014
Archive
January February March April May June July August September October November December
© American Roots Photography
User Agreement
Cancel
Continue