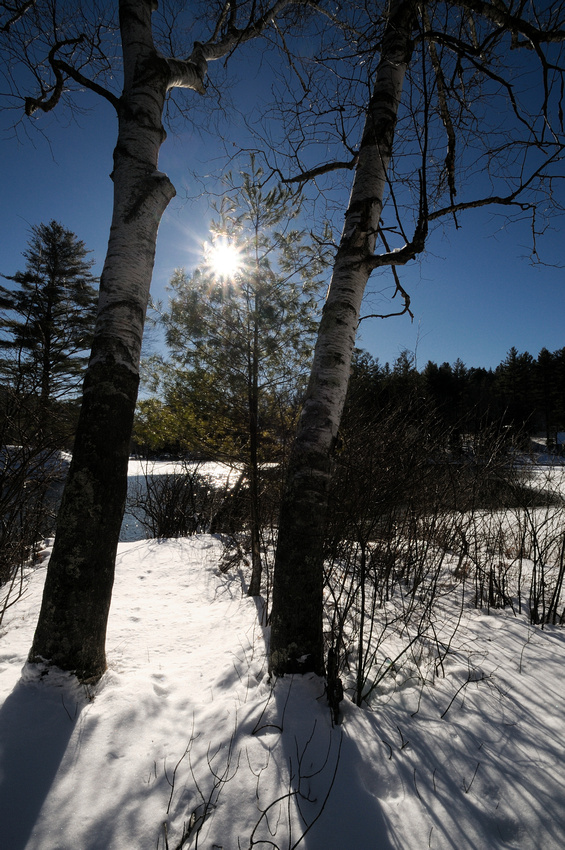 As much as I like winter in Vermont, I do look forward to longer daylight hours after the winter solstice. However, for early risers like myself during the first few weeks after the winter solstice the sun rises later each morning. The days are getting longer and the sun sets later each day but it also rises later. Kind of like a natural winter "daylight savings time". I will restrain the science geek in me and not try to explain why this happens other than say that is a combination of the tilt of the earth's axis and the closeness of the earth to the sun which speeds the earth up in its orbit. Another implication of this is that the "solar noon" and noontime on our clocks do not coincide. In fact they vary throughout the year. Inspired by the headline, I took this picture just behind my house at 12N on my watch. But according to NOAA the solar noon was 12:01:21. Not that big a difference but the solar noon can vary considerably throughout the year so those of you trying to sync your watches with your sundials...be forewarned. Obviously the sun is still not high in the sky even at noon, and as you can see by the shadows from the tree I am facing almost due south. I intentionally underexposed slightly the image to darken the winter sky and used a large f-stop to get a starburst. Tamron [email protected], f20, 1/200 sec, ISO 200.

Edie Littlefield Sundby(non-registered)
It looks C-O-L-D in Vermont. Very interesting picture Dave, with the position of the sun and the mid-day shadows. Here in San Diego that's the position of the sun at 9 am not 12 Noon! And to rub it in, today was 73 degrees, nary a cloud in the sky, no wind and utterly completely fantastic :)
No comments posted.
Loading...
Subscribe
RSS
Recent Posts
Plows, Family Roots, and History Roots Music To the Moon and Beyond Return From a Long Hiatus Hamilton House, S. Berwick, ME - digital sketch Back to Get More Rock The Nooning Let the Bridges Fall Down! Eureka! ...or this night Molly Stark sleeps a widow
Keywords
2013 landscape Vermont nature 2012 virginia Macro Winter portrait 2014
Archive
January February March April May June July August September October November December
© American Roots Photography
User Agreement
Cancel
Continue