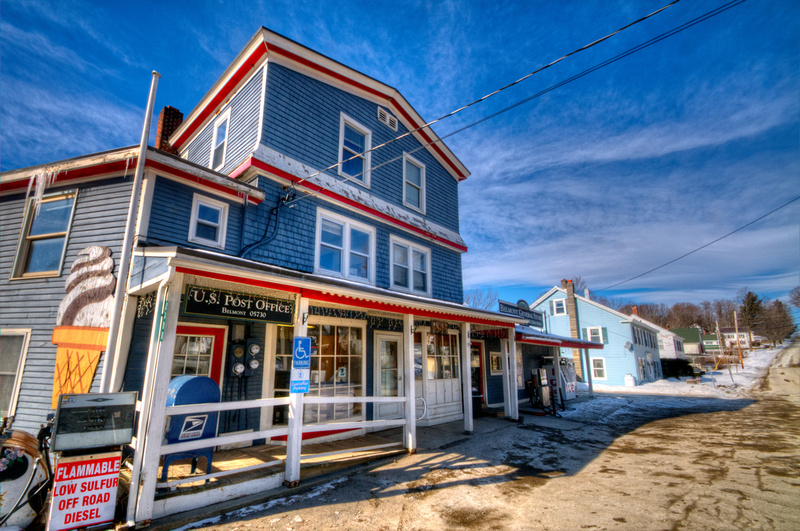 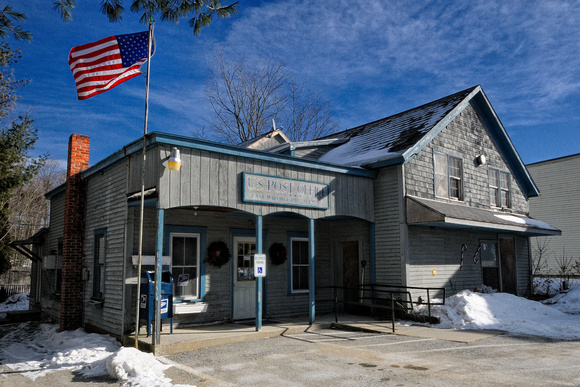 Today's headline came from our hometown weekly - "The Vermont Journal". A few days I reflected on technology's impact on television. But few institutions are being impacted nearly as much as the US Postal Service. I was an early adapter of email and successor technologies (social media, texting) but I admit I do not like seeing small communities lose their post office. In Ludlow I like going in and saying high to Diane and asking about her husband whom I fly fish with on occasion. And I miss Dave, our mail carrier, who once showed up at our house at 7P, Christmas Eve to make sure a package from my sister was delivered. I know the $ and cents involved and time moves on, but we are losing something. The first image I shot in the small, charming village of Belmont in the town of Mt. Holly (towns in VT are like townships or counties). Mt. Holly (pop. 1200) has had a post office since 1808 and the building pictured her was built in 1843. The post office is attached to the Belmont General Store, which is exactly what it's name implies. The second image is of the post office in East Wallingford, VT (pop. 450) and the post office was established in 1851. This is not the original post office building as the elderly woman I talked with explained - "it was here before my father died in 1943, but it used to be in the building, down by the bridge, that burned...". All this reminds me of the lyrics from the Joni Mitchell song, "Both Sides, Now" - 'Well something's lost but something's gained in living every day'.  Both pictures shot with Tamron 10-24mm. Fisrt image 3 shot HDR, f22, 1/125 sec +/- 0.3 ev. Second image shot at f22, 125 sec.

Post Script: temperature for the mail carriers in VT today anywhere from -5 to 5 with wind chills appropriate to wind gusts of 20 mph.

Ann Littlefield Coleman(non-registered)
I love both shots. Each to his own. My dad was a rural mail carrier for 46 years before the government said he was not needed as he was about to be 65. Daddy would have gone on until the day he died at one month to 93 if they would have let him. He loved serving the people. He also would take packages back out on the route on Christmas Eve if the train brought in something that appeared to be a long looked for Christmas present. Those were the real good ole days when people loved their work and did it so lovingly. I remember the Saturday afternoons when his week was over and I would go out to the very dusty, sand filled car and clean every part of it. I got to listen to the radio while I did it so that made it fun. Thank goodness for memories that makes these times still live--just like soon to be closed post offices.
Edie Littlefield Sundby(non-registered)
What a lovely building! Our La Jolla Post Office is closing - actually it isn't closing just moving to a smaller and less expensive location. There has been enormous public outcry. However, just as fires rejuvenate forests and destroy deadwood, allowing for new sprouts of growth so do these happenings. Last week our post office building was declared a National Landmark. It will be preserved and turned into a profitable venture (perhaps a coffee shop since it is on a lovely street corner). The murals from the 1930's will survive, the adobe will survive, the spirits will survive - just the venue will change. In fact, it may actually attract more people. It may become a community hub and a tourist attraction. New sprouts of growth are taking hold! One of my favorite life quotes is from Helen Keller: "“When one door of happiness closes, another opens; but often we look so long at the closed door that we do not see the one which has been opened for us.”
No comments posted.
Loading...
Subscribe
RSS
Recent Posts
Plows, Family Roots, and History Roots Music To the Moon and Beyond Return From a Long Hiatus Hamilton House, S. Berwick, ME - digital sketch Back to Get More Rock The Nooning Let the Bridges Fall Down! Eureka! ...or this night Molly Stark sleeps a widow
Keywords
2013 landscape Vermont nature 2012 virginia Macro Winter portrait 2014
Archive
January February March April May June July August September October November December
© American Roots Photography
User Agreement
Cancel
Continue