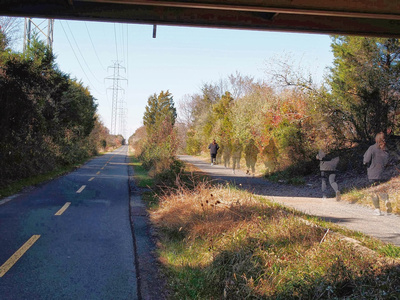 For younger readers "Far Out!" is a 60's expression that was used in much the same way "awesome" is used today. And of course, the use of "far out" immediately marks you as an old person. But older persons, such as my self, can learn new things. Continuing the previous Google Plus theme, the images today were generated by what Google designates "Auto Awesome". As mentioned in my last post, when you upload photos to Google Plus, Google automatically performs various actions to assist you in organizing and enhancing your photos. An included set of actions is the Auto Awesome function (click on the link to read a summary). Google+ has given me some new, clever tools and new tools require practice. Fall_Walk_11_90054_MOTION

Thus when a future opportunity presents itself, I will be ready to deploy the tool. Yesterday I set out on a walk with the intent of making shots that might be "Auto Awesomed". I shot with my OMD E-M5 mounted with a Leica Summilux 25mm lens set to f5.6 and the camera set to aperture mode and auto ISO. No post processing was done by me. The image to the left is an example of Action where Google+ recognizes someone is moving and merges multiple shots into one to depict the movement - great for sports. To the right is an animation generated from a series of still shots, an example of Motion. Note: the display here is a movie made from the animated gif generated by Google+, my blog provider does not support animated gifs. The animated gif is generated by Google+ plays over and over in an endless loop - cute to some, annoying to others. Finally below is a Pano generated from 3 overlapping shots. In each case Google technology recognized an opportunity for further processing. Before anyone makes the accusation, I have not become an absolute Google+ fanboy. But I do think think it has emerged as the best social network site for photo sharing. And remember these images were generated automatically by Google+ making life much easier for those whom want some "no effort required" post processing. And next I am doing one more post in this Google related series looking at a photo workflow for those who use just phone cameras for image taking.

Edie Littlefield Sundby(non-registered)
Far out! Groovy! Awesome! WOW! My favorite is the in-motion photo of the person walking. Not only did you have fun with Google+, but the results are stunning. Thank you for sharing this David and motivating me to catch up to the power of tech to transform and enhance our lives in even small, but significant ways.
No comments posted.
Loading...
Subscribe
RSS
Recent Posts
Plows, Family Roots, and History Roots Music To the Moon and Beyond Return From a Long Hiatus Hamilton House, S. Berwick, ME - digital sketch Back to Get More Rock The Nooning Let the Bridges Fall Down! Eureka! ...or this night Molly Stark sleeps a widow
Keywords
2013 landscape Vermont nature 2012 virginia Macro Winter portrait 2014
Archive
January February March April May June July August September October November December
© American Roots Photography
User Agreement
Cancel
Continue