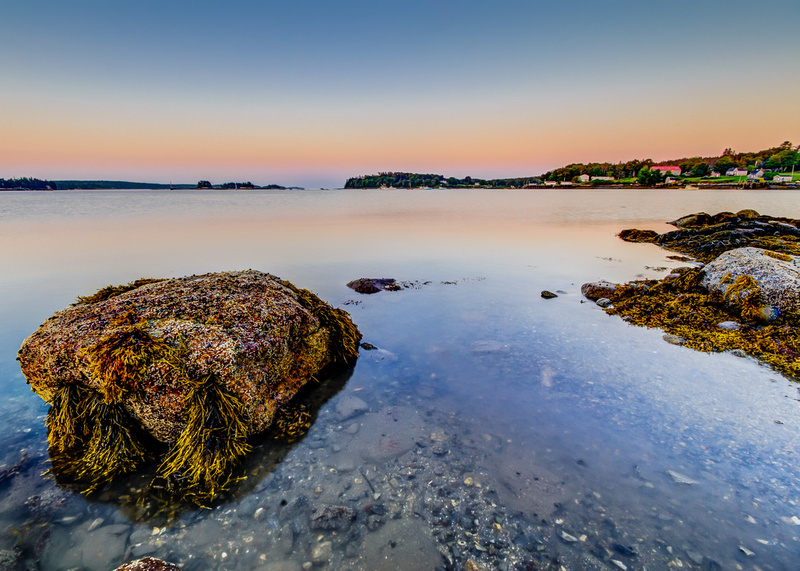 Both software and my processing skills improve with time. I originally took and posted this image in August, 2012 but I was never really satisfied with it. Recently the father of a good friend of mine passed away and I decided I wanted to do a personal card for her and I chose this image. Her roots are in Maine. This image is of Hatchet Cove near Friendship, Maine. Some of my earliest American ancestors passed by this cove in 1742 on their way to settling Waldoboro, Maine. I arose early to catch the sunrise and some color. The tide was ebbing as I arrived, just an hour before low tide. Maine tides are significant and as I waited on the appearance of the sun and color with my tripod just at the edge of the water, the shoreline receded fairly quickly. I would pick up my tripod and reposition again at the edge of the water keeping a watchful eye on the changing skyline. By the time I arrived at this spot and took the picture, I turned and I realized I was at least 50 yards from the shoreline and the large rock to the left had been underwater when I arrived. Themes of the past, present, and future echo in the many thankful descriptions on social media I read this month. As life moves before us and we follow its tide with an eye on a promising future, we are reminded to periodically glance back to the shoreline from which we came and to remind ourselves of the safe harbor provided. And we take note of the obstacles and opportunities as they emerge immediately before us hopefully successfully navigating them. So today I am thankful for a peaceful sunrise on a rocky Maine beach pondering the thoughts of Jacob Lagenauer as he passed with his family into the safe harbor of Broad Bay in October, 1742. The future held promise but many rocky obstacles lay ahead for those early settlers. Nikon D300, Tamron [email protected], f22, 5 shot HDR processed in ProPhotomatix v 5.0.

Edie Sundby(non-registered)
PERHAPS this is the exact image seen by Jacob Lagenauer as he passed with his family into the safe harbor of Broad Bay in October, 1742

PERHAPS it was etched into Jacob's DNA, waiting to captivate your mind's eye, and be captured in your lens...

PERHAPS it is a QRandom moment and the father of your friend whose roots are in Maine also trace back to Jacob, through friendship or kin.

Such is the mystery - and beauty of - life.
Ann Littlefield Coleman(non-registered)
As I look at the revealing picture of land and ocean in the summer I wonder what winter would look like. I feel a chill when thinking about those hard morning for the housewife dealing with the cold and the unfriendly surroundings, trying to adjust to their new home. Do you ever wonder if they cried out for what had been left behind or if this was truly a new beginning from hardships in the old country. Did the door close on them when arriving, always wishing for what once was theirs or what can be theirs on this side of the ocean. What we see does not always give hint of our heart.
No comments posted.
Loading...
Subscribe
RSS
Recent Posts
Plows, Family Roots, and History Roots Music To the Moon and Beyond Return From a Long Hiatus Hamilton House, S. Berwick, ME - digital sketch Back to Get More Rock The Nooning Let the Bridges Fall Down! Eureka! ...or this night Molly Stark sleeps a widow
Keywords
2013 landscape Vermont nature 2012 virginia Macro Winter portrait 2014
Archive
January February March April May June July August September October November December
© American Roots Photography
User Agreement
Cancel
Continue