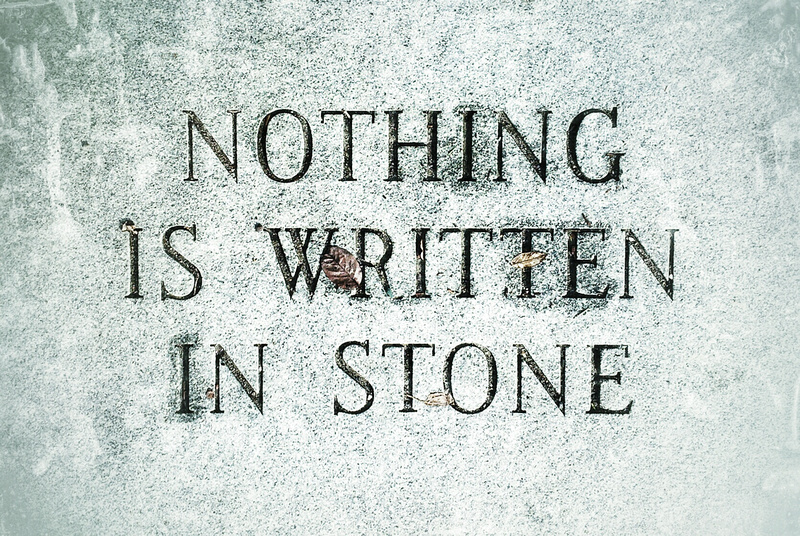 The end of January brings the end also of my picture/headline project. February will probably see fewer posts. One of my friends had assumed the headline/pictures a day project would last all year and was counting down how many days I had left. But in my January 1 post I stated I did not know how long I would do it. I will just now look for inspiration elsewhere. And as the today's image says - "Nothing is written in stone". The image is of a granite section of the walkway entrance to The Northshire Bookstore in Manchester, VT. Northshire is a rare store today - an independent book store. Claire and I love going there and spending time just browsing the shelves. All book lovers know the feeling. The picture was taken with my phone camera and processed in the phone using Snapseed to accentuate the texture/contrast in the granite. And those that love words will understand the title.

Patti Barksdale(non-registered)
Interesting! I always enjoy your work. This picture is interesting too, in light of a earlier picture of the tombstones. Sometimes...it is written in stone. Your youngest sister has already decided what she wants on her tombstone and I would love to use it too. It is, "In case of the rapture, please step back." I have read many things written on stone and learned things about people summed up in a few words.
A picture that I saw recently on the front cover of a book had words written in stone and those few words brought a lot of emotion. I love you!
No comments posted.
Loading...
Subscribe
RSS
Recent Posts
Plows, Family Roots, and History Roots Music To the Moon and Beyond Return From a Long Hiatus Hamilton House, S. Berwick, ME - digital sketch Back to Get More Rock The Nooning Let the Bridges Fall Down! Eureka! ...or this night Molly Stark sleeps a widow
Keywords
2013 landscape Vermont nature 2012 virginia Macro Winter portrait 2014
Archive
January February March April May June July August September October November December
© American Roots Photography
User Agreement
Cancel
Continue