Not the General Lee 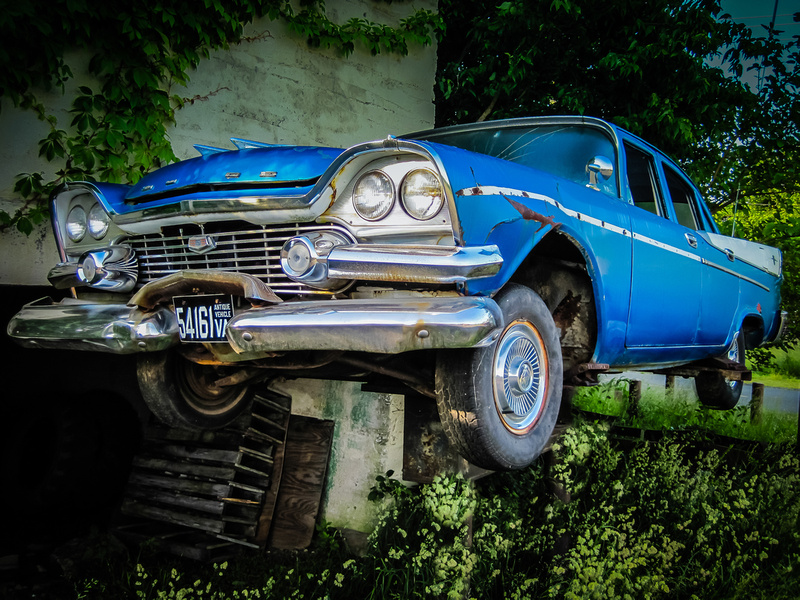 In the early 80's the tv show The Dukes of Hazzard was fairly popular. Like many shows, especially during that time period, each episode followed a predictable script and pacing which included a "jump" made by the Duke boys in their 1969 Dodge Charger before a commercial break. Probably not well known is that every car used in a long jump was retired afterwards due to structural damage and the show is estimated to have gone through at least 250 Dodge Chargers. As I bike along the W&OD trail near Leesburg a car repair shop is located just adjacent to the trail and I have passed this car numerous times making a mental note to take a picture one day. Often other vehicles are present obstructing the view. Today I was out early on my bike ride and was rewarded with a clear shot. I had my Canon D10 in my jersey pocket and grabbed a couple of shots trying to recreate a "jump" perspective. I have tentatively identified the car as a 1958 Dodge Coronet, but may be wrong. For me all cars from the 1956-1959 years are still my stylistic favorites. They also had great engines! Canon D10, 6.2mm, f2.8, 1/200 s, ISO 160 - not bad for a point and shoot camera.