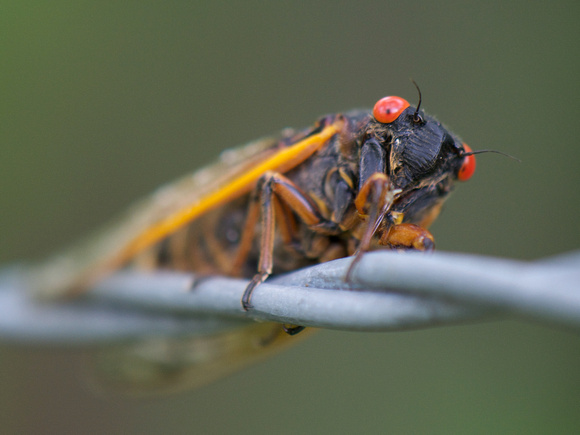 As some of you may know, 2013 is a year in which several million cicacdas will emerge from the ground after 17 years in the nymph stage. The adults have a face that probably only a "mother" cicada could love but I do think they are kinda cute. The ground has to reach 64 degrees before they will emerge, which happened this past week in Northern Virginia. Recognizing I will need to live to 80 before I get another chance to photograph them, I set out today to locate and shoot these fascinating critters. I located a nice brood near Manassas, VA in a development of million dollar homes. In the areas they emerge there can be almost a half million per acre. They merge, mate and live 2-6 weeks as adults. When the new eggs hatch the nymphs go back into the ground for another 17 year period. But as you will see from the short video they not only make themselves physically present but they do so in a very loud way. Stills shot with Nikon D300 and Nikkor 85mm macro. Video shot with Olympus OMD and 12-55mm.Cicadas

Ann Littlefield Coleman(non-registered)
Your notice about them coming kind of reminds me of Paul Revere calling out that the British are coming. I remember these critters well. Hate the noise and the mess they leave behind. But he is kind of cute in a critter sort of way. Each to his own mother I guess.
No comments posted.
Loading...
Subscribe
RSS
Recent Posts
Plows, Family Roots, and History Roots Music To the Moon and Beyond Return From a Long Hiatus Hamilton House, S. Berwick, ME - digital sketch Back to Get More Rock The Nooning Let the Bridges Fall Down! Eureka! ...or this night Molly Stark sleeps a widow
Keywords
2013 landscape Vermont nature 2012 virginia Macro Winter portrait 2014
Archive
January February March April May June July August September October November December
© American Roots Photography
User Agreement
Cancel
Continue