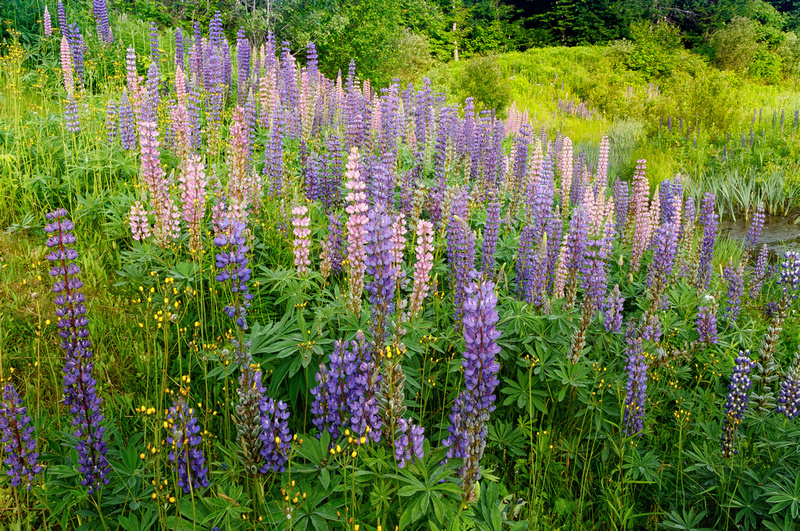 The Lupine is one of the more popular June flowers in the Northeast with people frequently commenting on having seen them in various places. Franconia Notch, NH even has an annual Lupine Festival. This year, probably due to cooler and wetter weather, the Lupine have been particularly lovely. Lupines belong in the legume family and as early as the Romans references can be found that their beans are edible. Normally sold in a salt solution like olives or pickles, the beans are consumed in many countries with the most numerous dishes found in the Mediterranean countries. This image was captured just as the rising sun hit the field: Nikon D300 with Nikkor [email protected], f20, 1/10 s., ISO 200. I wonder if Euell Gibbons ever ate Lupine neans

Barb Wendt(non-registered)
Although we missed them in NH this year, we did find beautiful displays of lupine in Seattle and Alaska. Apparently, the lupine was one of the first flowers to emerge after the eruption of Mt. St. Helen.
No comments posted.
Loading...
Subscribe
RSS
Recent Posts
Plows, Family Roots, and History Roots Music To the Moon and Beyond Return From a Long Hiatus Hamilton House, S. Berwick, ME - digital sketch Back to Get More Rock The Nooning Let the Bridges Fall Down! Eureka! ...or this night Molly Stark sleeps a widow
Keywords
2013 landscape Vermont nature 2012 virginia Macro Winter portrait 2014
Archive
January February March April May June July August September October November December
© American Roots Photography
User Agreement
Cancel
Continue