No Cable, One Car 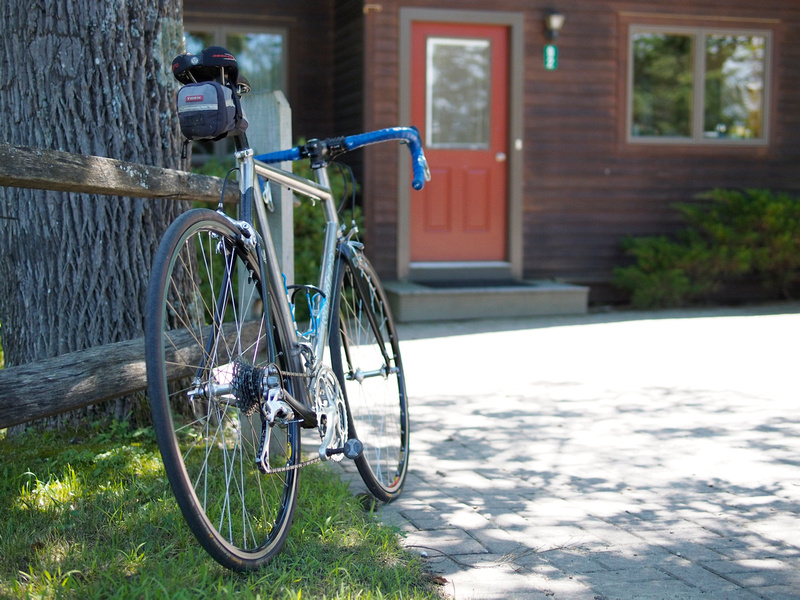 Sometimes an image needs a back story and this is such an image. When we moved to Vermont, Claire and I decided to give up broadcast and cable TV, although we will watch videos. Surprisingly to us, many of our acquaintances find this a little odd and often ask, "How do you know what is going on." We reply "radio, newspapers, and the internet", but that answer often seems to be less than satisfactory. About 3 years ago we decided to have just one car. This week Claire is away on a trip and so I am using my bike to get around. Plus I am like Blanche DuBois and receiving rides from the kindness of (not so) strangers. And now the reason for the post is reached. Monday night an old acquaintance called and asked me to breakfast, to which I replied that either I could bike to meet him or he would need to pick me up. His reply was, "so this one car thing is not working out so well". I informed him it actually was, but I still needed to work around not having a car this week. Neither Claire or I are on a crusade regarding TV or multi-car ownership, but we have found it interesting that these 2 items have become core to American life. Not only must we have TV's in several rooms in the house but now they play in restaurants, airports, etc. They are even at the gas pump. And we now need an automobile for each of us at our constant disposal, seemingly starting as soon as a driving license is issued. Claire and I have become surprised that people look at us askance simply because we have chosen no cable and one car. Olympus OMD and Leica Summilux 25mm/1.4 @ f1.8 (for blurred background), 1/4000s. Yes it is a new lens because one camera and lens just doesn't work out well for me.

PattiBarksdale(non-registered)
I for one like it and get bugged by the constant din of the tv! I sometimes just long for quiet and to be grounded from the television, phone, internet, going anywhere. Just to be unplugged, quiet, and still.
I love the verse from the Bible, "Be still and know that I am God." I sometimes think we have forgotten how to be still.
Ann Littlefield Coleman(non-registered)
I liked your tongue-n-cheek comment about needing more than one camera and lens. Some things have to change with need.
No comments posted.
Loading...
Subscribe
RSS
Recent Posts
Plows, Family Roots, and History Roots Music To the Moon and Beyond Return From a Long Hiatus Hamilton House, S. Berwick, ME - digital sketch Back to Get More Rock The Nooning Let the Bridges Fall Down! Eureka! ...or this night Molly Stark sleeps a widow
Keywords
2013 landscape Vermont nature 2012 virginia Macro Winter portrait 2014
Archive
January February March April May June July August September October November December
© American Roots Photography
User Agreement
Cancel
Continue