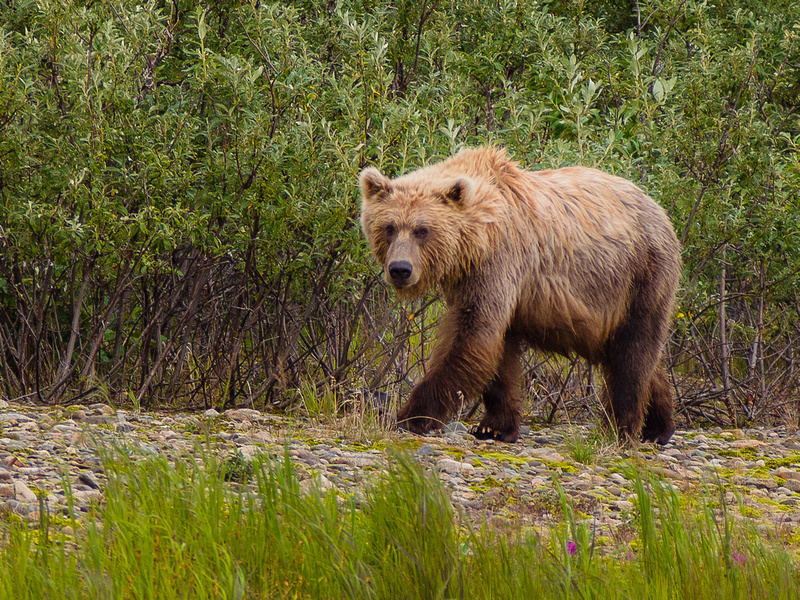 When a group of cyclists ride on busy roads the trailing cyclist monitors for motorists approaching from behind. When one is sighted, the trailing cyclists shouts Car Back! I have learned when fishing in Alaska the trailing fisherman on the river shouts Bear Back, or something otherwise suitable. On our recent Alaskan fishing trip we saw several bear while we were on the water but soon learned that through appropriate, non-threatening behavior and maintaining a respectful distance the bear would pass pretty much ignoring us. After all at this time of year the bear have plenty of fish available. In the picture below, this mother bear was about 50 yds behind me when I first noticed her. I was in the middle of the Brooks River in Katmai National Park and so was she. Obviously, I waded as fast as I could downstream and to the bank. She eventually moved to the opposite bank while her cubs stayed out of site in the shore vegetation until she passed and was down stream. Olympus OMD with m.zuiko [email protected], f5.6, 1/320 s, ISO 320. Trust me, they look really bigger in real life than in a zoo. 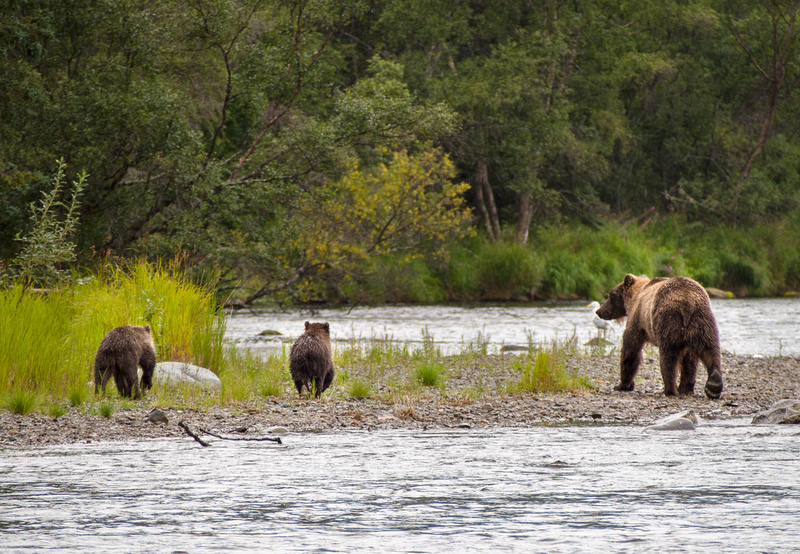 Edith L. Sundby(non-registered)
Whoa! That's a mean-looking bear. Add two cubs and it is a potential lethal situation. A good thing there are lots of berries and lots of fish in Alaska so the bears are VERY well fed. That said, Mama Bear looks quite skinny and hungry :) Dave, you are a braver soul that moi, to whip out your camera for a shot. In September 2011 when Dale and I were hiking in the wilderness of Wrangell St Elias National Park our hiking trail was littered with steamy fresh piles of bear scat, indicating there were bears around, and they were very aware of us even though we could not see them. Knowing they were lurking in the dark thickets just off the trail made for the scariest hiking we've ever experienced. We got back to camp as fast as we could, and i prayed every step of the way back until we were safely out of there!!!
Ann Littlefield Coleman(non-registered)
Beautiful sight to look at. Glad you made it back home in one piece. Any three of these look like they could rearrange your looks. I hope the fish you ate that night were worth the risk. I hope Claire knows our email address just in case she needs to notify us of an untimely accident during any future trips like this one.
No comments posted.
Loading...
Subscribe
RSS
Recent Posts
Plows, Family Roots, and History Roots Music To the Moon and Beyond Return From a Long Hiatus Hamilton House, S. Berwick, ME - digital sketch Back to Get More Rock The Nooning Let the Bridges Fall Down! Eureka! ...or this night Molly Stark sleeps a widow
Keywords
2013 landscape Vermont nature 2012 virginia Macro Winter portrait 2014
Archive
January February March April May June July August September October November December
© American Roots Photography
User Agreement
Cancel
Continue