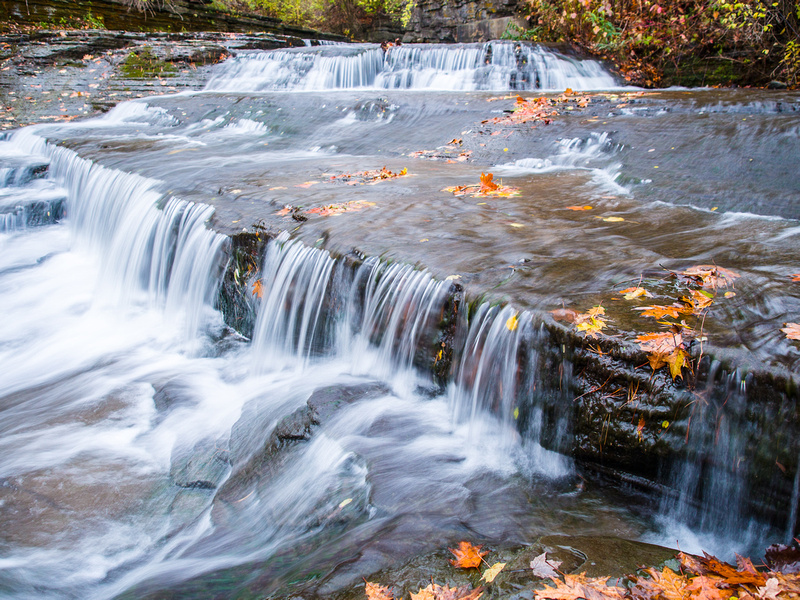 As soon as my good friend Bruce looks at this picture he will respond that he doesn't like the silky water because he wants to see the water as it "really" appears. Of course, I disagree telling him that water does not appear frozen in mid air. I shoot silky water because that is my preference. It is the way I "see" it. Photographers learn to make decisions when capturing images to show the "image" they desire and not necessarily the one visually before them. This falls is located on the Cornell campus in Ithaca, NY and the stream bank is adjacent to a busy main thorough fare. But as a photographer I chose to limit what appeared within the camera frame thus constructing an image that could easily be from deep within an isolated forest. I get to choose what I want viewers to see. I don't think of a camera as capturing "reality" simply because it can not do so. What we see in our camera displays represent decisions made by engineers, etc. to yield their vision of what the world looks like. For me getting better at photography, means not just accepting this vision. Indeed, if I let the engineers do all the work for me my friend Bruce would have a nice picture of water frozen in time, but that is not what my vision was. Whether in photography or other phases of life, one should never just take the choices offered but forge ahead with your own vision. Olympus OM-D E-M5 with m.zuiko 12-40mm/[email protected], ISO200, f2.8, 1/3 s.

Edie(non-registered)
David your photo is beautiful. Like life, it is more than the sum of it's parts, and less. You raise an interesting philosophical point about a camera capturing "reality" - you believe it cannot. Perhaps nothing can. A photograph, and reality, is viewed from different angles depending on what the eye sees, how the heart connects, and the mind remembers. And then there is technological manipulation ... oh my :)
Ann Littlefield Coleman(non-registered)
David, what a nice lesson in how we look or choose to look at something offered to us. However you think about it, I like what you have done. Pretty picture. I tend to see it as a beautiful gathering spot of a stream intent on getting somewhere. If we all were that driven maybe we would accomplish our goals. Lesson in point: I wonder if I will ever get these file cabinets, filled with generations of family history, re-organized as a memorial to those that came before me. If only I were driven like the stream in your picture it would happen in a timely fashion.
No comments posted.
Loading...
Subscribe
RSS
Recent Posts
Plows, Family Roots, and History Roots Music To the Moon and Beyond Return From a Long Hiatus Hamilton House, S. Berwick, ME - digital sketch Back to Get More Rock The Nooning Let the Bridges Fall Down! Eureka! ...or this night Molly Stark sleeps a widow
Keywords
2013 landscape Vermont nature 2012 virginia Macro Winter portrait 2014
Archive
January February March April May June July August September October November December
© American Roots Photography
User Agreement
Cancel
Continue