Coats of Many Colors 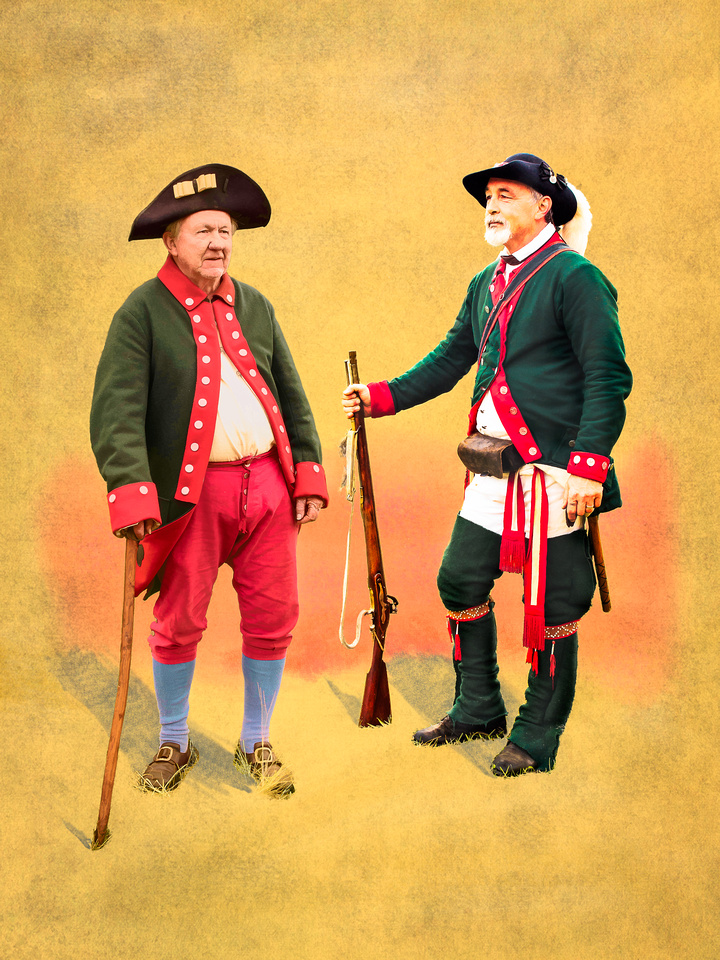 Real history is often complex and not given to simple stories. The Revolutionary War was in many ways a civil war, especially on the frontier. Above left is a Captain in the patriot Green Mountain Continental Rangers and on the right is a Sargent in the loyalist King's Rangers. Both groups were formed from colonial militias. Although much of their uniform is very similar, a variety of colors and styles were deployed by the various troops' uniforms who took part in the Revolutionary War. This image is somewhat in the style used by Charles M. Lefferts who researched and made water colors of Revolutionary War uniforms over a 30 year period. The link on his name connects to an index (with hyperlinks) of 70 plus of Lefferts paintings.

Between the French and Indian War and the Revolutionary War, New Hampshire and New York continued to dispute their claims on what became to be called the New Hampshire grants, especially in today's southwest Vermont around Bennington. New York tried to assert their control forcibly which led to the organization of the Green Mountain Boys, a militia led by Ethan Allen and his second in command, Seth Warner. After several violent confrontations, New York put bounties on the capture of Allen, Warner, and others. But before resolution was reached, the Revolutionary War broke out and in May of 1775 the Allen led Green Mountain Boys were crucial in capturing Fort Ticonderoga from the British,. The canon captured at Ticonderoga and Crown Point were transported to Boston and were critical in forcing the British to abandon Boston's occupation early in the war.

Allen and Warner then traveled to Philadelphia petitioning the Continental Congress for the Green Mountain Boys to be organized into a Continental Army regiment. Congress directed New York to organize and outfit the regiment. New York reluctantly did so despite the arrest warrants they had issued against Allen and Warner. Surprisingly, the Green Mountain Boys elected Seth Warner and not Allen as their Lieutenant Colonel and leader. Thus Warner became the commander at the Battle of Hubbardton, the only Revolutionary War battle on Vermont soil. During this same time period, Robert Rogers offered his service to George Washington but Washington distrusted him and arrested him as a spy. Escaping Washington's custody, Rogers then organized for the British the Queen's Rangers, although many of the original Roger's Rangers joined with the patriots. Real history is often complex.