Where is the Wall to Mend? 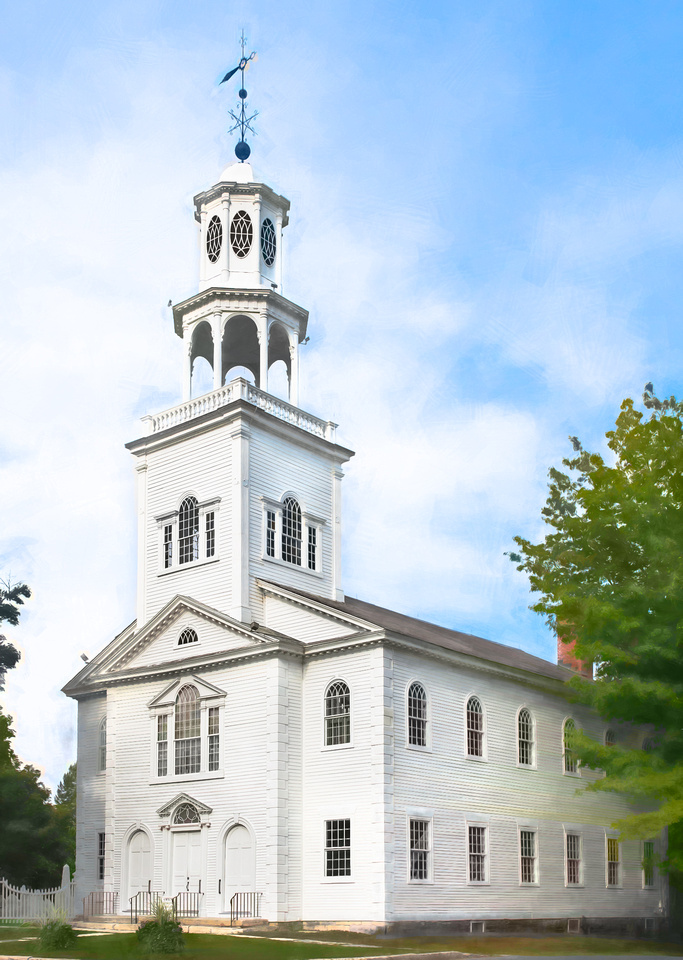 The Old First Church of Bennington (above) was built in 1805 but the congregation was formed in 1761 by Capt. Samuel Robison and six families. Although Bennington was first laid out in 1749, as detailed below, the arrival of this band of Congregational Separatists in 1761 constituted the founding of Bennington and the first example of separation of church and state in Vermont. The construction of this beautiful building was paid entirely by the members with no public money. And as an aside, Robert Frost is buried in the graveyard officially proclaimed by the Vermont legislature as "Vermont's Sacred Acre" and the church was designated as "Vermont's Colonial Shrine". The church is open to touring by the public and all are invited to worship there.

Putting aside France's claims, all or part of the area comprising today's Vermont was claimed at times by the colonies of Massachusetts, New York and New Hampshire. The conflicting claims arose from inconsistent decrees from successive English Kings and from the avarice of colonial governors. New Hampshire's western border had never been set but New York's eastern boundary was decreed as the western bank of the Connecticut river in 1664. In 1700, King William III set the western boundary between Connecticut and New York to be a line 20 miles east of and paralleling the Hudson River. In 1740, King George II set Massachusetts' northern border as it is today and eventually New York,following the Connecticut agreement, ceded its border with Massachusetts to be a 20 mile line east of the Hudson River.

In 1741, Bennington Wentworth became the New Hampshire colonial governor. Being both bold and ambitious, Wentworth decided that he would make town grants in the land west of the Connecticut river and to within 20 miles of the Hudson River. Of course, parcels of this land went to both himself and those close to him. His very first grant was Bennington in 1749, utilizing the "20 mile east of the Hudson River" precedent. In making this grant he skipped over a large section of unsettled land to layout a town within just 40 miles of Albany -  a direct challenge to New York's land claims. New York was slow to respond and by 1764, Bennington had made 135 grants of what became to be known as the Hampshire Grants. In 1764, New York did get a decree from King George III reaffirming the border between New York and New Hampshire as the western bank of the Connecticut River. But New York also got greedy. The settlers in the Hampshire Grants had paid for their lands and now New York demanded payment again. Thus the Green Mountain Boys, a local militia led by Ethan Allen, rose up in opposition to New York's demands for payment and control. The Green Mountain Boys frequently met at the Catamount Tavern near the Old First Church. And the land dispute between New York and New Hampshire continued into the Revolutionary War when it was further complicated by a new state calling itself Vermont.

Jane Goldthwait(non-registered)
I have always admired this church when driving past it each summer. However, I need to stop and see it better some time.
I participated in an archeological dig at the summer mansion of John Wentworth who I believe was Bennington's nephew. The mansion was in Wolfeboro, NH, and burned down in 1820.
No comments posted.
Loading...
Subscribe
RSS
Recent Posts
Plows, Family Roots, and History Roots Music To the Moon and Beyond Return From a Long Hiatus Hamilton House, S. Berwick, ME - digital sketch Back to Get More Rock The Nooning Let the Bridges Fall Down! Eureka! ...or this night Molly Stark sleeps a widow
Keywords
2013 landscape Vermont nature 2012 virginia Macro Winter portrait 2014
Archive
January February March April May June July August September October November December
© American Roots Photography
User Agreement
Cancel
Continue