...or this night Molly Stark sleeps a widow

I took and include this photograph of  the mural "Prisoners Taken at Bennington Battle"  by Leroy Williams (Bennington Museum) for a couple of reasons. First the many different American, British, and Hessian coat colors are exhibited . Mounted on horse in a blue coat is General John Stark and the first mounted individual to his right is Colonel Seth Warner in his green coat. Next to Warner is Colonel Samuel Herrick (also in green), another important Vermont militia leader. Secondly, the painting was done by Leroy Williams of Chester, VT who was hired to do it by Roosevelt's Works Progress Administration. Williams was hired along with many other artists around the country during the depression to complete paintings, drawings, and murals for public appreciation and education.

After the engagement at Hubbardton, the British general John Burgoyne was encamped at Fort Edward some 50 miles north of his target - Albany. Burgoyne had leisurely pursued his objective and was in need of supplies. He sent Lieutenant Colonel Friedrich Baum with 700 men to raid Bennington and the force was joined by another 300 loyalists and Indians. What the British did not know was that General John Stark (of French and Indian War fame) was camped in Bennington with 1500 men and Seth Warner was just 30 miles to the north with another 350 men. Eventually Herrick's Rangers would join the effort to confront the British bringing the entire force to around 2000 New Hampshire, Vermont, and Massachusetts patriots.

On August 16, 1777 Baum was decisively routed by Stark's and Warner's forces at the Battle of Bennington, although the battle actually occurred 10 miles away in Walloomsac, NY. At the beginning of the battle Stark famously rallied his troops by saying,  "There are your enemies, the Red Coats and the Tories. They are ours, or this night Molly Stark sleeps a widow." 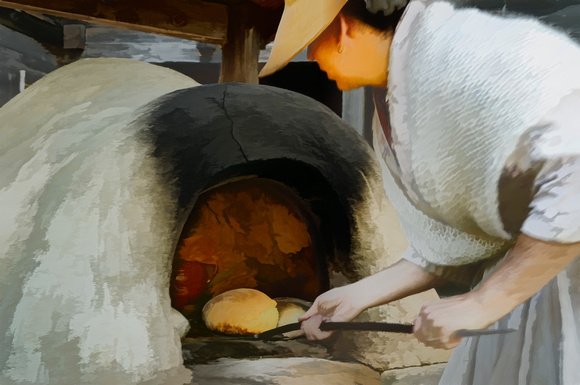 Molly Stark is well remembered for her nursing to her husband's troops and the use of her home as a hospital during the war. Numerous buildings, schools, etc. are named for her in both Vermont and New Hampshire as well as the Molly Stark State Park in Wilmington, VT. Another well remembered woman is Mary Tilden Dewey, daughter in-law to Bennington's first minister. Prior to the Battle of Bennington, numerous troops were bivouacked in her home and the night before the battle she and her household stayed up all night baking 80 loaves of bread. Her husband, Eldad, delivered the loaves to the battlefield. All of the bread was cooked in a beehive oven,  a cooking mainstay of colonial America. The image to the right is of a oven in use at Fort No.4 outdoor museum.

The Bennington Battle victory was particularly important to the ultimate defeat of Burgoyne and the British at Saratoga as Burgoyne lost almost 1/6 of his army at Bennington. With Burgoyne's Saratoga defeat the the British army was reduced by about 7000 troops and the attempt to split New England from the colonies had failed. In 1778, the British turned the focus to the Southern colonies and Vermont renewed its focus on operating as an independent Republic.