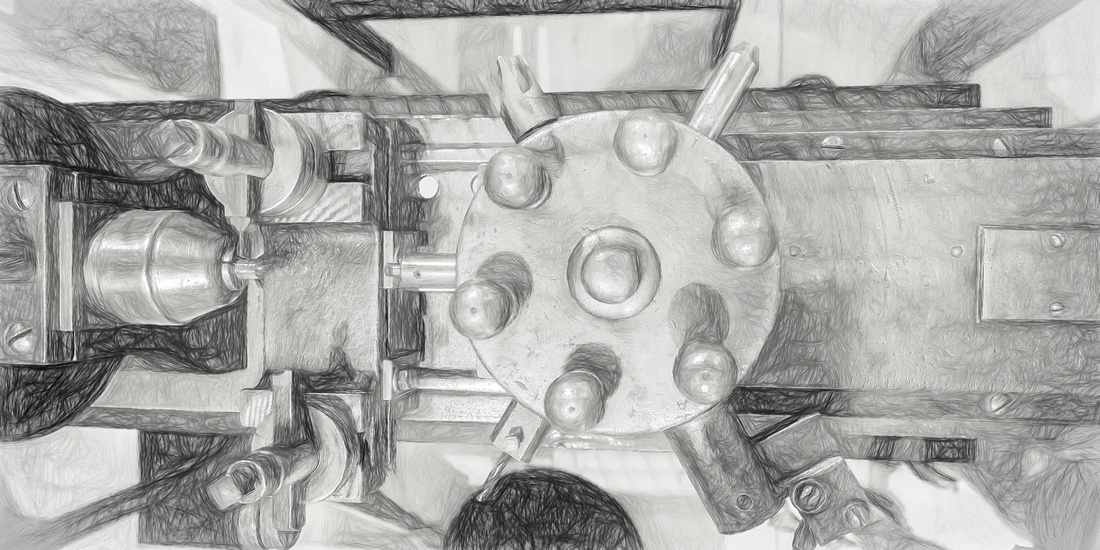 Note: It is recommended to read the prior blog(s) to fully appreciate this posting.

The above simulated pencil sketch is a top view of an 1861 Turret Lathe in the American Precision Museum located in the original Robbins and Lawrence building in Windsor, VT. Frederick W. Howe, Richard S. Lawrence, and Henry D. Stone of Robbins and Lawrence are credited with doing much of the important advancement and development of the turret lathe. So as discussed in the prior blog when the successor company of Jones and Lamson was purchased and moved to Springfield, VT this technology and product were acquired. But in 1888 when the move was made the turret lathe and other products of Jones and Lamson did not represent a sustainable business, even with the tax breaks provided by the Town of Springfield.

The Windsor Jones and Lamson superintendent left soon after the move to Springfield and so the investors began a search for talent to run the operation and manage the business. Adna Brown searched and found James Hartness in Torrington, CT and enticed him to come to Springfield to run Jones and Lamson. At 27 years old, Hartness was already a very experienced machinist and a talented inventor.

Because his prior employer had taken his patents and then fired him, Hartness insisted on a 3 year contract and a $100 (roughly $2500 today) royalty for each machine of his design sold. At the time turret lathes sold for $1100. He began work at J&L January,1889 and in August 1891 was issued a patent for what is now known as the flat turret lathe. In this design the turret can pass under the piece being cut and thus much longer parts can be accommodated and held more rigidly. The Hartness Flat Turret Lathe was an immediate commercial success.

W.D. Woolson in 1891 was now 25 years old and a major stockholder in the company as well as the treasurer. Hartness proposed that the J&L operation make only one product - his flat turret lathe and W.D. backed him in this bold move. Together the two young men formed a extremely successful 44 year partnership that transformed Springfield. By 1895 over 400 Hartness Flat Turret Lathes had been sold and in addition to his $100/lathe royalty, Hartness was receiving a $5000/year salary and soon to become president of J&L.

J&L attracted exceptional talent and when one of their employees had a great idea Woolson and Hartness helped set them up in businesses of their own. Among these businesses were: Fellows Gear Shaper Company (Edward Fellows, 1897); Bryant Chucking Grinder Company (William Bryant, 1910); and Lovejoy Tool Company (Fred Lovejoy, 1917). Springfield came to be known as the Precision Valley and as late as the 1970's Springfield residents had the highest per capita income in Vermont.

Besides his mechanical brilliance, Hartness had numerous other interests. He was the first licensed pilot in Vermont and built its first airport, Hartness State Airport in North Springfield. He was an amateur astronomer and helped organized the Springfield Telescope Makers later renamed the Stellafane Society which annually holds a large amateur telescope convention. In the process Hartness teamed with Russell Porter (artist, engineer, amateur astronomer, and artic explorer) to develop the Optical Comparator which is still made at J&L Metrology in Springfield, VT. Hartness served as governor of the state and held numerous professional honors. But his legacy and that of Precision Valley was also firmly rooted in the gunmakers that first delivered precision made guns in 1846 from the Robbins and Lawrence facility in Windsor, VT.

Note: The information for this post is taken almost completely from Frederick W. Richardson's book - "Nineteenth Century Springfield:From an Agricultural to Industrial Community".