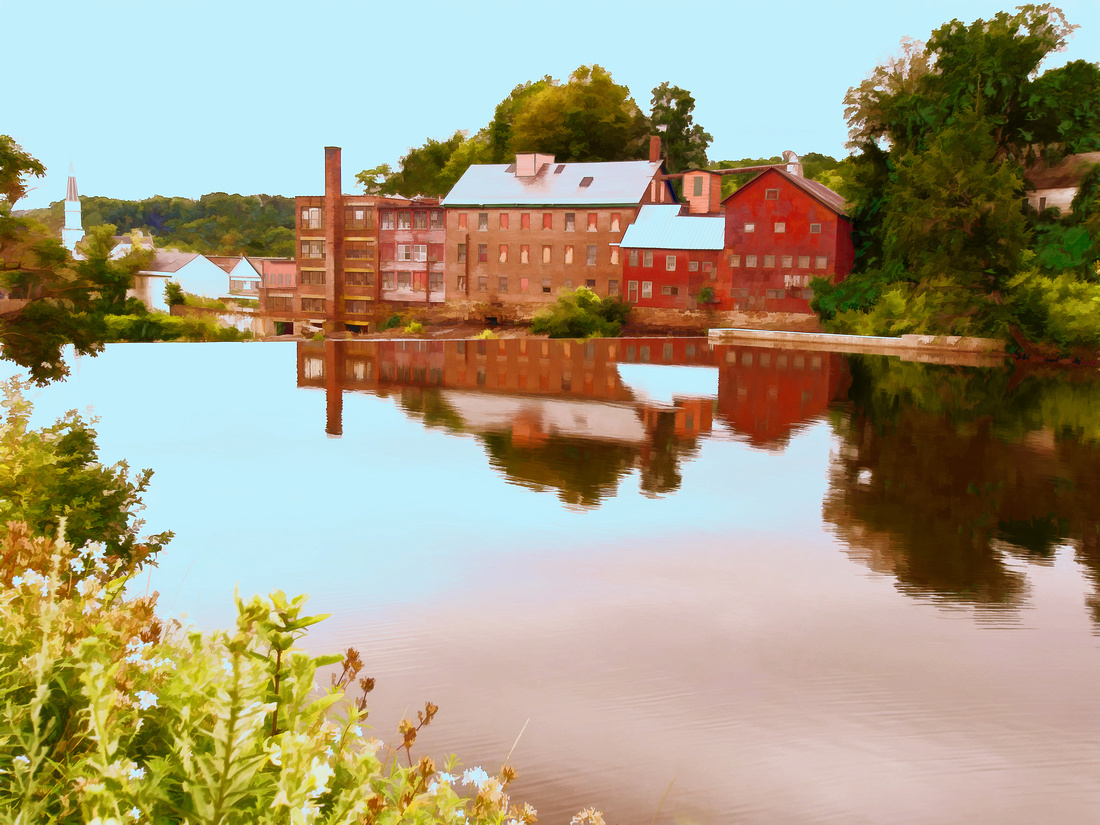 This image is of the now shuttered Parks and Woolson operation, a maker of clothing manufacturing equipment. The 3 story gabled roof building in the center was built in 1829 and the original equipment made at this facility was for the shearing of wool and the manufacture of woolen clothing, this being during the Vermont "Sheep Bubble". The building is located in Springfield, VT on the western side of the Black River upper falls. In 1850, Adna Brown came to Parks and Woolson as general superintendent and rose to become part owner and president. By the 1880's Adna, along with other prominent citizens, realized that the overall economy of Springfield was stagnant and needed growth.

Also by the 1880's the Windsor, VT machine tool facility had changed business focus and ownership several times and was now the Jones and Lamson company. The company was also struggling and looked to local capitalists for new investment but none was forthcoming. Meanwhile 17 miles to the south, Adna Brown led a group of investors late in 1887 to purchase control of Jones and Lamson's stock. However, the business was still risky and the investors wanted to mitigate somewhat the risk before relocating Jones and Lamson to Springfield. They requested from the town of Springfield a 10 year tax exemption and in December 1887 at a special town meeting the tax exemption was granted by a vote of 573-1.

In February 1888, Adna Brown was elected president of the stockholding group and 22 year old William D.("W.D.") Woolson was elected assistant treasurer. W.D. was the son of Amasa Woolson, an early partner in Parks and Woolson, and at the time of his election a clerk at the bank. By the summer of 1888 a two story brick building had been built on Main Street next to the Black River for water power. In 1888, Springfield still had no railroad service so the equipment had to be laboriously transferred by wagon over the mountainous, dirt road between Springfield and Windsor. But by October 1888 the Jones and Lamson Company was in Springfield, VT and would become an important machine tool company known throughout the United States and the world. Young W.D. Woolson would prove to be very important to the company, but the basic business model in 1888 was still problematic, despite the tax abatement. Then another important individual was recruited to Springfield - James Hartness.

Footnote: The Parks and Woolson facility that began in 1829 continued operation into the first decade of the 21st century.

Note: The information for this post is taken almost completely from Frederick W. Richardson's book - "Nineteenth Century Springfield:From an Agricultural to Industrial Community".

easy essay writer(non-registered)
This is on a basic level practically identical to working with a covering up, near this time you'll be picking a shape. For example, be paying exceptional brain to circles. In addition, when you find them, perceive how you can oversee them. Finally, you may bar the entire buoy over the range of action,
No comments posted.
Loading...
Subscribe
RSS
Recent Posts
Plows, Family Roots, and History Roots Music To the Moon and Beyond Return From a Long Hiatus Hamilton House, S. Berwick, ME - digital sketch Back to Get More Rock The Nooning Let the Bridges Fall Down! Eureka! ...or this night Molly Stark sleeps a widow
Keywords
2013 landscape Vermont nature 2012 virginia Macro Winter portrait 2014
Archive
January February March April May June July August September October November December
© American Roots Photography
User Agreement
Cancel
Continue