The People of the Dawn Land 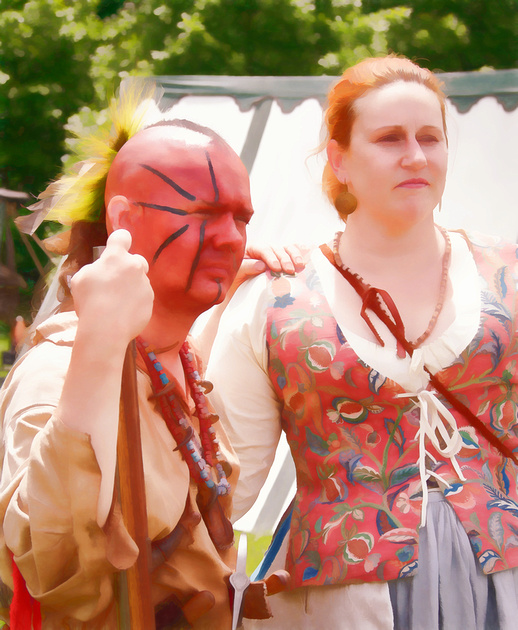 Mahican Warrior and His European WifeTrade Day at Fort No. 4

Meet River Bear and his wife. Before you read further take a moment to assess your reaction to this image. This couple are married in real life, both have considerable Native American ancestry, and attend events as a Mahican warrior and his European wife. I would be remiss to do a history of Vermont and not recognize the first inhabitants. Although the Mahicans were in what is now southern Vermont, The dominant group were the Abenaki which were found in today's Vermont, New Hampshire, and Maine. The largest numbers today are found in Canada where the Abenaki migrated to as the English colonists encroached upon their territory. The Abenaki were part of the Wabanaki, a large tribal confederacy belonging to the Algonquian language group. Wabanaki is an anglicized version of a word meaning "people of the dawn" or people of the east.

To say the least, 17th and 18th century colonial America was an exceedingly complex struggle among numerous nation groups. Each group had interests and enemies and often the old dictum of "the enemy of my enemy is my friend" rang true. The French in Canada and the British in the New England colonies not only competed for control of the same territory but often engaged in proxy wars reflecting their old world conflicts. For a variety of reasons the Algonquian tribal groups tended to align with the French. Various Algonquian tribes often warred with tribes from the Iroquois Confederacy and in conflicts with the French, the English often were able to rally the Iroquois to their side.

But history is not just complex at the macro level, it is also often fascinating and more complex at the individual level. The numerous raids and battles between these actors inevitably led to prisoners. And the Native Americans were often deployed to intentionally take captives to be used in exchanges between the French and the English of important prisoners. The valuable captives would be relinquished but the fate of other captives was up to the Native Americans with especially young women frequently being spared as potential slaves and wives. Traders also often took Native American wives, with the end result being many Americans who can today claim both European and Native American ancestry.

Several captive stories exist, often told with a decided European bias and depicting the captors as uncivilized savages. Often loved ones would try to redeem their captive relatives and some had success. But sometimes the captive would refuse to be ransomed with one of the more famous being Eunice Williams, aka Marguerite Kanenstenhawi Arosen. Her fascinating story is told in the book "The Unredeemed Captive: A Family Story from Early America". The daughter of the Congregational minster of Deerfield she was taken with her family and a total of 100 persons in the famous 1704 Deerfield raid. She was adopted by a Mohawk (an Iroquois tribe) and eventually married a Mohawk man (and a Catholic convert) with whom she had 3 children. Her ransomed father and then her brother spent several decades trying to "redeem" her but she refused to return. But she did on several occasions visit her New England family. So, as I stated above, at the individual level the relationships in Colonial America were often more complex and different that what our broad brush history would have us believe.